If the world of gardening had rock stars, Piet Oudolf would be Mick Jagger, David Bowie and Prince rolled into one. He is a living legend in the design world and has gained the greatest respect and admiration from the industry.
The Dutch landscape designer’s work is instantly recognizable for its dreamy romanticism and its emphasis on sustainable, sensible planting.
According to Piet: “…designing a garden is like a language. When I design gardens, I translate what the customer puts forward together with the information I collect from the location – the Genius Loci – into a garden concept that fits like a custom-made suit where I have shaped the style, the characteristics, and the forms into a single story, a harmonic whole. The lines of force form a stage for the poetry of the garden: the incidence of light, moments of time, sounds of leaves, the seasons with changing colours and the scents, and so on. So many elements constantly play a role in the garden. Therefore the garden should be arranged so as to reflect every day of the year”.
Piet believes that the most exciting thing about landscape architecture is the unexpected, “A garden is not a thing, it is a constant process. Creating and maintaining a garden is the search for the very tempting but delicate balance between the ephemeral and the timeless”.
Piet is an influential Dutch garden designer, nurseyman and author. He is also a leading figure of the “New Perennial” movement, using bold drifts of  herbaceous perennials and grasses which are chosen at least as much for their structure as for their flower colour.
It’s safe to say that Piet’s work makes us completely weak at the knees. Here are just a few images from our many favourites. 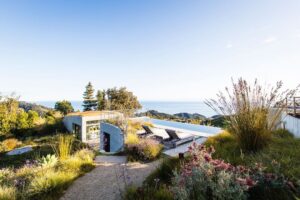 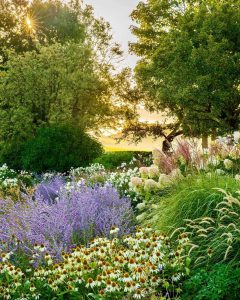